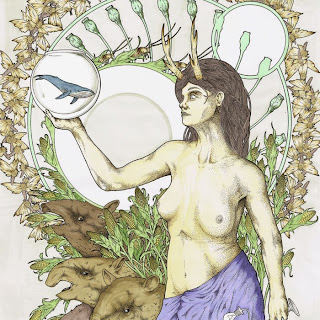 I love these guys and you all really should too. Being utterly cracking chaps aside, they're bloody talented too, managing to rack up quite a catalog of work in just under 2 years. So just 10 months after releasing their absolute corker of a debut, they've hit the studio once again. Honing their finely tuned skills once more, they've managed to follow up their self titled release with yet another brilliant fusion of old school rock with just a touch of blues. I say a 'touch' of blues, there's a whole lot more thrown into the mix than just that, eclectic isn't the word. You don't even have to listen that assertively and you'll pick up little smatterings of every corner of classic rock. Nothing's left unexplored, psych, prog, southern rock, the early beginnings of the genre and its latter days alike, and naturally being good ol' Danes, there's nice subtle touch of Nordic twang underwriting the whole thing. It's quite a feat, managing to be so textured and diverse without falling over yourself or being too complex and bewildering. The tone of the entire album just flows so easily, whether it's picking up a garage rock esque pace or dropping down to a tempo that almost boarders on full on doom, nothing falters. Whats more they manage to really capture the essences of each genre they dabble in to, which serves as a real testament to their individual talent as well as their focus as a collective.
Everyone knows that Graveyard are currently ruling the roost when it comes Scandinavia's hard rock scene, but I think these guy's may just be coming out of left field to give them a run for their money. At this rate I can't imagine it will be much longer until Doublestone produce an album to really rival that of Hisingen Blues. But time will tell on that one, as for now, well Windmakers is most certainly a solid step in the right direction. Head on over to the Bandcamp page and give your ears something special, oh and stay tuned for news on the vinyl...
~ Jay