Doom And Back Again... 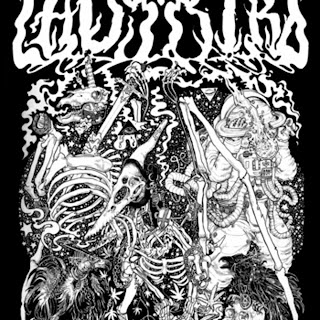 The first of two albums released by Ladybird this August (stay tuned to find out about the other in a few days), Spliff & Wesson is, to put it simply, massive. There's only two tracks, but the titles alone give an idea of what's in store; there's Spliff & Wesson, then Nossew & Ffilps, both of them hovering around the 24-minute mark. The first pulls the listener to the middle of the album with a dangerous undertow of bass with enough reverb to make your speakers rumble across the floor, sun-cooked desert rock guitar soup with big doomy production, and enough undulating harmonics to get your head good and properly reeling before it's spooled out across the floor. The B-side (Spliff & Wesson is currently only on CD and cassette, but keep your fingers crossed for a vinyl release!), Nossew & Ffilps, takes everything from the first track and straight-up plays it in reverse! And it works! For 24 more minutes! Pardon me if I seem over-excited, but such a bold move, fixing the success of the album on an ability to compose not only normally, but in reverse, is infrequent enough that having it actually roll its heavy way backwards across that duration (with some fine doom pay-off) makes it almost auto-legendary. Personal prediction: This one will be listed alongside Sleep's Dopesmoker in years to come, for reasons of swirling, riff-loving technique, being colossal, and being a challenging but highly rewarding experience. Beat the rush while you can, get a copy now, listen to it in a dark room, and dig it.
~ Gabriel