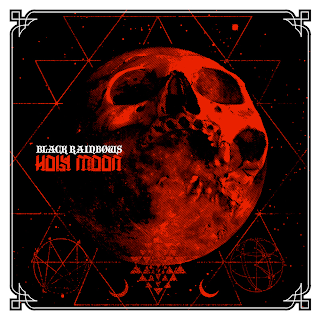 The latest release from the doom-rockers in Black Rainbows is a six-song EP (clocking in at around 36 minutes of riff-filled goodness) titled Holy Moon. It begins with the title track, a reverb-drenched wailer that kicks off with a sample from an astrological record, announcing plans to investigate the sun; after that, the track dives into the deep end, letting the guitar's swirling fuzz eat up the space between the listener's ears. Monster Of The Highway rears its head after that, and it certainly is a monster; the guitar sounds like the Wolfman has his claws in it, while the vocals arrive in a strong desert rock style, echoing like the sound is rumbling its way up out of a pit in the earth. Then it's on into Chakra Temple, nearly nine minutes of atmospheric, slower-paced drone and doom, with guitar that sounds ready to give the call to worship in a Shaolin monastery as it gradually builds into sonic overdrive. There's a bit of a breather afterwards, in the form of The Hunter (only half as long as the prior song), a doomy hard rock song that introduces a wood-block only to decisively toss it away. If I Was A Bird (at a relatively short three minutes) sets things up for the last song by taking an acoustic guitar interlude backed by wind-blown vocals and some light tambourine. Finally, they fade into Black To Comm, which returns to the doom rock with a patchwork of riffs, stormy feedback, and killer drum-work, taking its time to kick some ass over its 12-minute stretch to the end. Awesome, fun stuff that'll get your body moving; if you like your rock equal parts blues and doom, do yourself a favour and get a copy of this EP before they're all sold out!
We've had a word with the guys and for one week only, you can now download the track The Hunter for free.
~ Gabriel