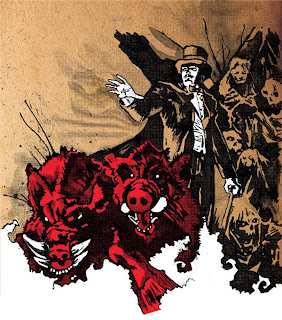 Ever wondered what it would be like if the muppets from Fraggle Rock got stoned and became rabid? Me either until now but if they did this would be the soundtrack to their fuzzy brand of world domination via rabies! Netherlands based No Gods No Masters Demo EP is blasting through my speakers today. Fuzz and Sludge and plenty of it! This 4 track EP is wall to wall aggression and doom...
Track two Lost For Words has a nice WeedEater meets Fu Manchu vibe. The band seems to take inspiration from the stoner doom scene of the New Orleans variety. Much like the NOLA based Down and Crowbar but more up paced and evidently, more angry. On the track Lie To Me the latter becomes even more apparent as the sludge continues. The guitar tone through out the record is huge and did I mention, FUZZY!? Yeah its that fuzzy! Combine that fuzz with a solid rhythm section & screaming low/high vocals you have one badass doom machine. The closing track, Retired, is the most NOLA inspired of the lot and by far the most hefty of the tunes on the short collection. Over all this is an impressive sludge/doom effort that stands on it’s own amidst tons of great music in its genre! Before I go do yourself a favour, Get fuzzy, get high and turn on Fraggle Rock (if you can find it), mute the TV then replace the sound with No Gods No Master and enjoy!
~ Stephen


For Fans Of; NOLA, Down, Electric Wizard, Weed Eater, Crowbar

No Gods No Masters (free)