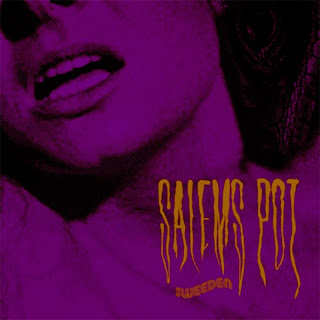 Fancy some unbridled, weed tempered doom? Well hell, are you in for a treat!
If you missed our coverage of their Watch Me Kill You/Run The Night EP, then, well, screw you! But you can somewhat redeem yourself here...
Just like so many of the classics of the genre(s) such as Dopesmoker, Blood Lust and Amerijuanican, Sweeden possess all the fuzzy malevolence of an eerie ghost train coming chugging towards you through a thick haze of bong smoke. Bordering on progressive in places and acid rock in others, it's real charm lies within it's sheer creepiness and ability to almost draw you in to a voodoo trance like state. I swear, every time I chill out and chuck this album on within minutes I catch myself staring into the distance, almost frozen in place except for my head just bobbing along of its own volition. It's power to just wash over you and seep into you soul is pretty mind blowing, even when you're not chock full of illegal narcotics or whiskey. I'm sober as a judge right now and I'm still finding it mesmerising as hell. I think it has something to do with the fact that it sounds like playing an Uncle Acid 7" at 33rpm. Seriously, its uncanny! If you've got Poison Apple of Mind Crawler go try it, I'll wait...
See! Weird isn't it? So I guess those good old Swede's really did discover the formula to classic stoner doom, and to nail it on their first album too... Damn, many a band would sell their grandmothers for that accolade.
So how exactly do you go about improving on such benchmark of an album? I'll bloody tell you how... you give it to Dan over a Easy Rider Records and let him work his brilliant vinyl magic on it thats how! Yup, following their beautiful press (and subsequent repress) earlier in the year of Watch Me Kill You/Run The Night, they've finally followed it up with Sweeden. It's been worth the wait too, just feast your eyes on these beauties! Limited to 30 Test Presses, 50 Gold (Die Hard), 75 Orange, 75 Burgundy, 100 Purple, 150 Violet Red. In suitable fashion they hit the store yesterday on Halloween, so hurry over be they're all snapped up! Failing that, or if you just want a no frills download, you can hit up their Bandcamp site below and pay what every you want for all of their work... What a start to the weekend eh?
~ Jay