To the Depths of Depression 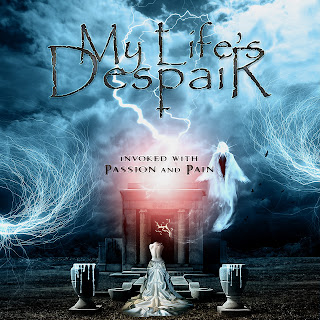 We don't get sent a ton of gothic doom metal around here, and even less is worth reviewing. That's why I when I gave the new album from My Life's Despair a listen, it was a rather pleasant surprise. Being just a two man project from southern California, they duo take elements from black and death metal, then intertwine it seamlessly into what you'd normally consider gothic doom. The album's forth track is a prime example, after a keyboard intro some spoken vocals and a guitar part drops in before things slow down again. Once that happens it takes a few moments for a thick guitar track starts in, and the raw, black metal styled vocals make their first appearance. After a short interlude the screamed vocals are given some contrast with a pristine female vocal track. While this is going on, the arrangement is filled with ripping guitar sections and some crashing blast beats. Around the half way point the song takes another turn, slowing down with the piano reemerging and taking over the spot light until the vocals come back in. That carries the song through the last couple minutes of its duration. If you have fond memories of the 90's gothic doom scene, My Life's Despair is worth looking into for nostalgia's sake if nothing else. You can pick up your digital versions through iTunes, or physical copies here.
~Skip


For Fans Of; My Dying Bride, Draconian, Tiamat