Trapped In A Cloud... 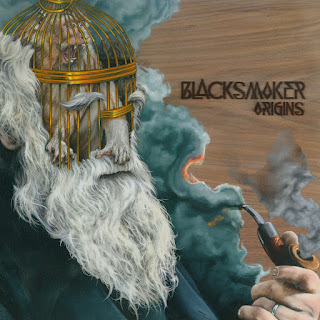 With a perfectly suitable title for their debut album, Blacksmoker have burst from the depths of Germany with eight tracks of deep-toned and dirty stoner doom with a wide stripe of rock energy (sometimes turning into thrash) to keep the fire burning bright.  Kicking hard on all of the instruments, and bellowing to match their power, Blacksmoker bring the thunder for first impressions, but for good or bad, all of the songs seem to blur together.  It's not because they all sound alike (the band does a nice job of avoiding that pit by changing things up pretty regularly), but at the end of the album, trying to think back to individual tracks, there's just so much shredding and smashing that pulling out single moments is a high challenge.  At least until a riff springs up out of memory and compels you to throw the album back on in full to find out which song held it, that is.
Fans of high-powered doom/stoner rock, check this one out, just don't try to make any sense out of the cover art.  The limited wooden box edition is already sold out, but you can find NA and EU distributors of the vinyl (along with the name-your-price digital version) on Blacksmoker's BandCamp page.  Get on it and turn it up.
~ Gabriel