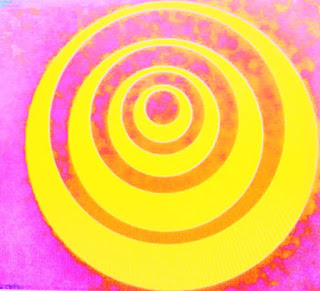 Already out with a full album after the release of his debut EP, pink haze, back in May, chainsaw rainbow is back with more loose-minded treks through thick fuzz and meaty riffs, keeping a heavy psych vibe ringing out while digging into shoegaze grounding.  Virtually devoid of vocals, the music focuses on chewing into the riffs as on the EP, with two tracks from that release, "astropop" and "pink haze", included on this album for comparison of how the style has expanded.
With the guitar's echoing and gnarled sound-waves providing the main pulsing beats to the music, it's easy to hear the music as something larger than a single player's output, as long as you're in the right mood for the chord collisions.  It's a set of songs that call for your ears to give up their usual expectations and go with the fuzzy flow, and while that's a mode that might be difficult for some to slip into, fans of heavy psych and extended riffage would do well to check into chainsaw rainbow with this release.
~ Gabriel