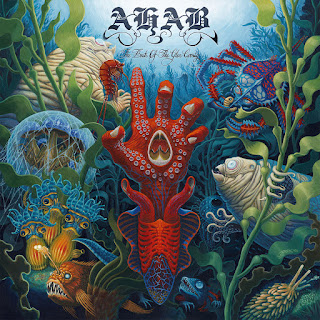 The much-anticipated new release from the quartet of AHAB has finally landed, holding five tracks (only one under ten minutes) in its cargo.  From the start (well, after a little calm to build atmosphere), the band shows a thunderous power, shot through with veins of colder menace, and the shifting from one to the other and back again leads to some interesting effects.  As usual with this crew, the setting is nautical, which they emphasize with waves of feedback, curling melodies, and percussion that crests and break against the rest of the strident elements.  The band pulls together an impressively unified front, letting each member get some spot-light, but generally keeping things near-equally divided in the work-load.
The wailing strains of the guitar against harder crunch made for some of the most hair-raising moments in the album's run for me, but the whole thing has a professional standard to which it holds itself.  If you're not already one of the many who've ordered a copy, it makes for a nice entry point to the band's catalog, and for those who've enjoyed AHAB's previous releases, there's little here to make you regret sticking with them.
~ Gabriel