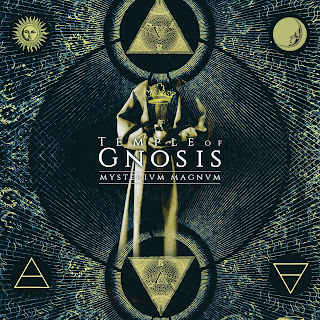 This new EP from the solo project Temple Of Gnosis pushes its format as far as it can go, edging right up on the half-hour mark with four helpings of ritualistic doom.  Opening with the title track, the EP prepares the experience with a heavy cloud of vibrations before close-noted guitar tears in with pulsing drums backing it up, and a deep voice rasping away under the crashes.  There's a pleasing sense of vastness to the recording acoustics and the echoing quality used for the instruments, which does a good job of strengthening the atmospheric effect, as does the unhurried flow from the end of one song into the next one's rattling rise.
There's a slight blackened flavor to the occult trappings and dirty vocals, amplified whenever the guitar or drums shift from the usual dirge settings up into battle mode, which might turn off some prospective listeners.  Personally, I think the music is stronger for its inclusion, as it opens up paths to some really furious outpourings of viciousness that would be out-of-bounds for a band operating under pure doom metal guidance.  The harshness also serves to put listeners at arm's length, calling for deeper-than-usual focus to sink into the dark grimness the music holds in store.  Despite keeping some fluctuation going in the instrumental energy, there's a firm thread of mood linking the four tracks together, and they make an excellent start for this musical project.
~ Gabriel