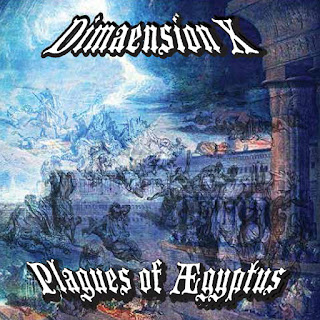 To call this album atmospheric would be an understatement.  Built on the ten Biblical plagues of Egypt as a conceptual base, the hour-long invocation layers elements of tribal music, some death metal, drone, and more over the doom metal foundation, crafting something distinctive and effective at causing goosebumps to crawl over your skin.  Lice, frogs, flies, and all the rest of the curses are given their dues with escalating pressure and tension, driven by recitations from the corresponding passages.  The biggest problem in the album is that "Death of the Firstborn" finishes without much fanfare or crescendo, making it underwhelming after the enjoyable journey through the preceding songs.  That aside, there's a lot of good work at play in the album, and its release under Creative Commons might garner forgiveness from some listeners.  So if you've been looking for some real 'wrath of God' type music lately, go on and give this a try.
~ Gabriel

For Fans Of;    Ak'chamel, Demon Hunter, Flight of the Seraphim, Isis, Samael