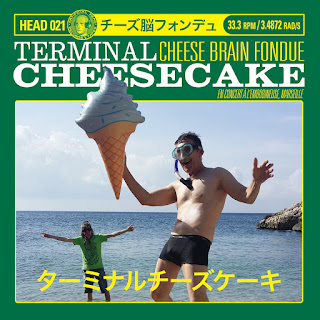 A little over 20 years after their last release, Terminal Cheesecake have resurfaced on Artifical Heads Records with this double-LP live album, including the entirety of the 75-minute show they played and recorded last year in France.  The set-list includes tracks from their first album on through to their last, providing a thorough look through their noise rock, heavy psych, space dub kaleidoscope.  There's also a new track, "Fake Loop", which opens the album with a 10-minute-plus sprawl of calm hallucination before the move into rougher stuff.  And once that rough stuff starts in, it gives few moments of forgiveness for unwary listeners, so be prepared for brain-churning action once you get this sucker pouring out of your speakers.  Twisting and turning through abstract feedback and body-moving riff revving, TC decisively show that their skills haven't rusted in the slightest during their time away from the public.
500 copies on vinyl will be available from Artificial Head Records, with an official release date of October 20th, though you can go ahead and pre-order it if you want to be sure of getting one (and if you like heavy psych, you almost certainly do), or you can snag a reasonably-priced digital copy from their BandCamp page.  There's also rumblings of a new studio LP to emerge next year, so those who've been hungering for more Terminal Cheesecake the past couple decades will finally have enough mad psych rock to fill their appetites, at least for a while, and those new to this excellent band will have a fun time digging into their catalog.
~ Gabriel