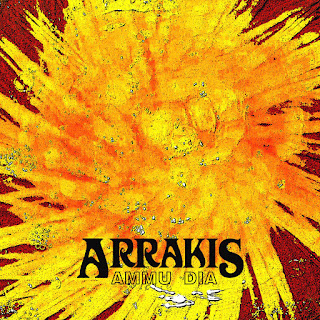 Hailing from the smokier regions of Greece, this three-piece is making with their first LP after figuring things out on a couple of demos and an EP.  Sprawling out to an hour's worth of heavy psych treats, Arrakis dig into deep grooves and twisting trips with strong performances from each of the members.  Nimble percussion (with some really nice use of the cymbals), rough'n'fuzzy guitar that spreads out colorful arrangements, and a bass to practically bounce you out of your seat come together strongly, mixing together bright sunbursts and doomy somberness with clever ideas and some kicking viciousness when they need it.
It's a great performance, and a hell of a first album.  There's some great variety to be found in Arrakis' deep dives, leisurely cruises, and frenzied freak-outs, though listeners who've just gotta have some vocals to connect them to the songs will sadly be left out in the cold.  One of the better heavy psych records to emerge so far in 2015, I wouldn't be surprised at all to find this on a number of year-end top pick lists.  Do yourself a favor and grab a copy before then if you like heavy psych rock or wild stoner metal.
~ Gabriel