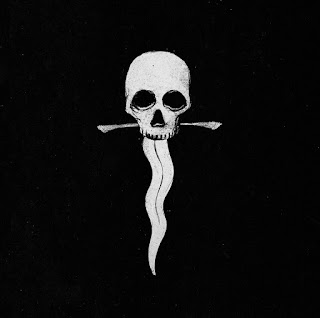 For their debut LP, the Austin-based quartet of Sweat Lodge have come out swinging with a retro hard/heavy rock style (plus a light dusting of '90s grunginess), concisely-written songs, and an occasional similarity to Ozzy's distinctive delivery in the vocals.  Keeping things grounded with a crisp beating from the drums, the rest of the band rumbles around with tobacco-stained attitude, yelling, pounding, and otherwise making themselves known while having a blast.
The album zips right along, springing the last song on you before you know it, but that seems kind of fitting for the music of Talismana.  It's high-energy stuff, so cutting it short keeps things from getting too tiresome, while also encouraging you to pop it in for another quick listen whenever the urge takes you.  There's some fun stuff lurking in there for those repeat listens, and plenty of hooks to find lodged in your brain days later, so if you want some more of that heavy rock with a splash of psych, try some time with the Sweat Lodge guys.  Ripple Music are handling the release, so hop on over to their page if you plan to pick up a copy.
~ Gabriel