Back In The Throne 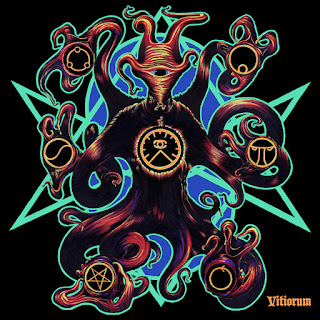 After a widely recognized album with their last effort "IV", Black Hand Throne are back. This time taking a page directly from the stoner doom handbook, creating a concept album that is a stand alone track with a nearly forty minute duration. "Vitiorum" isn't some second rate "Dopesmoker" clone though, using elements from funeral doom metal and bouts of High On Fire styled intensity together to their full potential. After opening up with what sounds like piece of a Jim Jones rant, things start to move along at a bludgeoning pace, dragging the music's immensity with it each beat. The singer's snarled vocals start in almost immediately, telling the tale of "of a man living out the seven deadly sins, while repenting to a religious zealot more twisted than the man before him". Things slow down a bit, offering up a darker, more menacing atmosphere than before. Like the difference between someone beating you with a tire iron, and someone's cold gaze focused on you while plotting your torture and eventual death with said tire iron. The song goes back and forth like this, the endless dance between pummeling heaviness and a slow, crawling darkness. By the time you get to the end of the track, and have spent the last half hour kind of immersed in this whole thing, it starts to switch up a bit. The lighter tones start to show through a little bit, and at one point almost picks up a stoner rock sound. Within the last ten minutes things slow to a crawl with the exception of a howling guitar part. The vocals have even changed by now, simply speaking the lyrics instead of growling them out, and even a little melodic singing some by the very end of the song. You can pick up your vinyl and cds directly from Swamp Metal Records, or check out Black Hand Throne's bandcamp for your digital fix.
~Skip