In the Monolith's Shadow 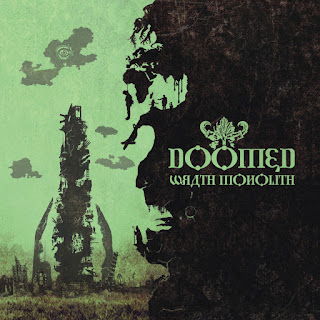 Doomed have been around a while now, spreading their version of atmospheric death doom metal. This latest effort "Wrath Monolith" isn't a huge departure from the sound they've built their reputation on this far. The only real noticeable change is perhaps a slight increase in the intensity of certain parts. Seemingly relying on the brutal side of the music more than the atmospheric aspect that they've used so well in the past. This change in approach doesn't effect the album though, it's still good ole' Doomed that we've all come to know over the years. Being a death doom album, it should be no surprise that most of the songs clock in somewhere around the ten minute mark. My standout was "Our Ruin Silhouettes", featuring massive guitar parts that drive everything forward with brutal efficiency, with the deep, growling vocals laid perfectly on top. One of the shorter tracks, but still coming in at over six minutes, it seems to fly by from start to finish. Part of that is because of the that change of intensity I mentioned early, making the most out of an aggressive tempo and sound instead of relying on atmosphere to get their points across. As you move through the album, and down the list of guest vocalists, you get to "Looking Back" which is probably the only use of clean, melodic vocals on the whole album. But there's still plenty of gnarly, guttural vocals to go around on it also. With all of that going on, it's not wonder people are loving the new album. You can pick up a copy through Solitude Productions or on their bandcamp page and see for yourself.
~Skip