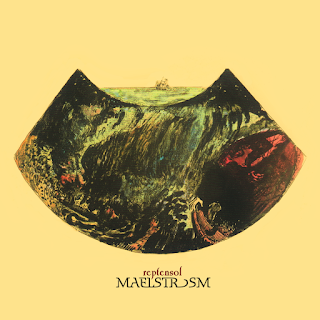 While Reptensol may be making their debut with this album (and your guess is as good as mine as to how the title's supposed to be pronounced), they've been around since 2007, going through line-up changes and trying to get demos to people's ears.  Finally available to the public after the band's decision to go the self-release route, the oddities (and storminess) of Maelstrɔsm hardly end with the title, as they blend together psych, stoner, thrash, doom, and several other styles into a fast-changing and violently inventive set of tracks that keep the surprises coming from start to finish.
It's not just their twisting wildness that gives Reptensol a fist full of power, though.  The slight buzz of self-production (which does little to detract from the experience) is one of the only signs pointing to the band's rawness, and with over half a decade leading up to this point, it feels likely that it's there because they want it that way.  Similarly, each track comes out hard and ready to beat your brains in, but with enough tightness on the reins for the band to steer it in any direction they like.  Chugging riffs, spiraling progressions, and occasional spits of humor are woven together with flair and a steady sense of how much can be loaded into the songs, packing them so full the seams strain but hold fast.  It's a far cry from the standard stoner rock, and the experimentation rarely falters or hits a false step.  Damn good stuff, well worth the time spent cooking it up.
~ Gabriel