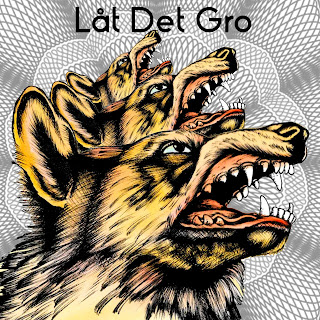 Making their entrance with this demo, the Swedish group of Låt Det Gro (translated, 'Let It Grow') draw audible inspiration from the doom-influenced heavy rock of the '70s, with warmly-amped guitar tones and snappy percussion joining chill bass grooves and smoky vocals for a pleasing and authentic-sounding trip through memory lane.  Snazzy casual shredding comes into play for bridges and solos, laid-back riffs propel the songs along, and in general, the band seems right at home in the crusty-denim world they've brought back to life in their songs.
As the band uses their native tongue for singing and song-titling, non-Swedes may be a bit lost to the specifics of LDG's intent, but the spirit of rock does its job of conveying their enthusiasm with little confusion.  As long as you're willing to let the grooves take you, and you've got a taste for traditional heavy rock, this demo's worth giving your time to hear.  Fingers crossed that the quartet will be able to put out another set of songs in the near future, but until then, this set will have them in good standing.
~ Gabriel