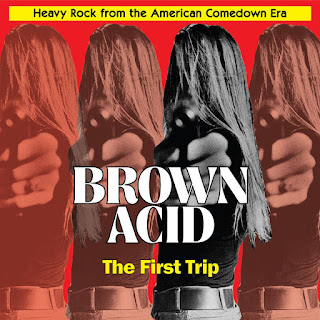 Between Permanent Records' Lance Barresi and RidingEasy Records' Daniel Hall, the tunes on this compilation have been assembled from some serious collections and hard-to-find records, all of them showing the roots of metal as they grew in the '60s and '70s.  Fuzz, riffs, attitude, and honesty are the things you'll be hearing here, decked out with flavors from funk, psych, and hard rock (and just a dash of pop every now and then to help give those choruses some extra hooks).
Between blistering guitar-work, snazzy drumming, and grooves that'll get trapped between your ears for days, it's a collection that'll have you ready to go do some digging of your own to turn up these bands and more unknown excellence.  It's also some great stuff to just pop on when you want a heavy rock fix without having to deal with the modern sound of bands imitating bands who were imitating... well, you get the idea.  This is the real stuff, not slavish emulation generations removed from the original fire.  Before stoner rock got pinned down with specific criteria, before metal had any specifics beyond 'heavy', bands like these were making and breaking the musical molds.  And now it's here for easy access, so you don't even have to deal with moldy record jackets or dust from sleeves that haven't been pulled out in decades (if you don't want to, that is).
Best of all, the original labels and band-members have been tracked down, and these are genuinely licensed tracks, not just cheap bootlegs, so the sound quality is solid while the creators get due credit, royalties, and so on.  If you have any interest in getting a more-informed perspective on stoner rock's lineage, or just want some dirty, fuzzy rock, this compilation should be on your list of records to acquire.
~ Gabriel

For Fans Of;    Cold Blood, Fear Itself, It's A Beautiful Day, Salem Mass, Steve Miller Band