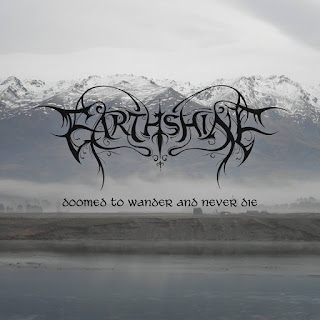 Spanning ~45 minutes across six tracks, this debut album from the Australian band of Earthshine makes for quite an impressive entrance.  Building on a broad doom metal base, the group emphasizes atmosphere and slow, haunting riffs, with growling vocals which work to strengthen the music instead of just roaring over it.  The percussion and groaning strains of the strings come together with some excellent chemistry, and while the vocals are done well, the singer kindly steps back from time to time so that Earthshine can show off their skills with slow-churning power.
There's something that's difficult to place a finger on in the mixture of styles Earthshine uses on this album - a sort of jazziness to the break-downs, some faint psych rippling to some of the grooves, and a lean post-metal readiness with experimentation shaping the songs are all in there, but there's something practically ineffable as well.  It's tempting to just chalk it up to their musical character, vague as that might be, but that would be short-selling how fascinating they can be.  Whether trying to pick apart their writing-process decisions or just soaking in the results, it's an engaging and absorptive experience.
Similarly, I don't want to shrink the impact this album has in its own standing, but I am damn excited at just the idea of where the band will be with their next album, given how much range and potential they show here.  If atmospheric doom metal is in any way to your liking, check this album out.
~ Gabriel