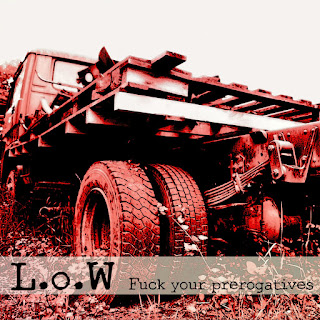 From the heavy-duty cover art and release title, this demo had me expecting some rough-and-tumble material, and it did not disappoint.  From the sludgy vocals to the rumble of fuzzy bass, L.o.W. dripped aggressive attitude with every note.  There's a joyful abandon to their playing, with enough slop to their style to keep things rooted in dirty honesty, and to my ears, they draw a lot of inspiration from bands of the late '90s, when the NOLA sludge sound was starting to spread to other regions, each with their own take on it.
The band also has some surprising touches of melody going on, mostly with middle track "Unfuckables", adding some uncommon flavor to what they're doing.  There's enough variety going on to make for a good demo, and fans of sludge that colors outside the lines may want to check in on them with this and future efforts.
~ Gabriel