The Dark Side Of The Moon... 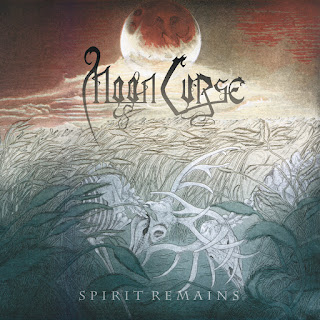 Update - In an unexpected turn of events a couple of our writers wanted to cover Spirit Remains, so instead of fighting to the death to unveil a victor, we're just gonna post both reviews. So there...

~
To my mind, there are two types of heavy: the sort that leaves you nodding your head to grooves and the sort that leaves you cowering in fear from your speakers.  While Moon Curse don't quite reach the infernal racket of, say, Come My Fanatics-era Electric Wizard, they're certainly not messing around, and while there's plenty of groove to this album, if they had to be put in one of the two brackets, I'd err on the side of the latter.  Throughout this album the lumberingly heavy riffs tempered with generous doses of auditory LSD puts me in mind of a recent favourite of mine, the great Monolord.
Spirit Remains is the Milwaukee, Wisconsin trio Moon Curse's second long player and it pretty-much ticks all the boxes for what an epically-proportioned stoner doom record should be.  The songs are long, they're heavy and very well-executed.  While Moon Curse's sound is not one that's never been explored before, they do it as well - if not better in some cases - than any other comparable band of the last few years.
Music this heavy can often feel a little brutish.  While that's no bad thing per se, continuous crushing heaviness with no moments of relief can feel somewhat caveman-like, for need of a better phrase.  Moon Curse have clearly realised this because their particular brand of heavy psych doom has little touches here and there that make this feel like one of the more sophisticated examples of the style in recent memory.  On Electric Veins there's a great section lead by the trippy vocals, with only minimal work from the instruments.  There's also a synthesizer in the background giving the song little flourishes of colour every now and then.  Other moments stand out too - the acoustic outro of the frankly incredible "Lord of Memories" really sets the song apart as something different.
Spirit Remains would be a great album without any of that.  The riffs are great, the vocals are well done, the drumming is excellent, and it's generally a well-recorded album.  What gives it the edge over the numerous other lesser albums in this style is the panache with which the album is executed.
~ Martin


My relationship with Moon Curse harkens back to the early hours of a Friday morning sometime in August 2012, when one night I stumbled upon their bandcamp page. Several (ok, about 8-10) Jack and cokes into the night I found myself buying all four variant's of their awesome debut LP, and have loved them ever since... I now own no less than 10 copies of that record, superseding all my other obsessive collections (Giants - Old Stories (7) and Sleep's Holy Mountain (7)). So with all the will in the world, I'm going to try my hardest to be entirely unbiased with the forthcoming paragraphs...

Ok, thats bollocks, Spirit Remains is awesome and you all need to buy it. Sod it, I don't care. I've been listening to this for what must be nigh on a year now if not more, in demo's, rough cuts and various other incarnations and it had me gripped from the very first play.
Right out off the bat the band's musical progression is clearly evident. Everything feel's bigger, grander and more layered than before. This can often be the downfall for a band of this ilk. With the increased recording budget and overly thought out song structure that often comes with a follow up album, band's often end up straying away from elements that were so often the true heart and soul of their original style. Once those elements are polished away a massive chunk of the character regularly goes with it. Thank fuck, that didn't happen here, I'd be heartbroken. No, once again the trio have knocked it straight out the park. Retaining all those element's that I loved about the self titled album and most notably my favourite track Black Elk, everything has just been added to, rather than been replaced to make way for new ideas. The most notable addition is an increased ferocity which really helps carry the album forward. The track Vicious Sky is a perfect example, as the increased pace works brilliantly to contrast the very Sabbath like 11+ minute tone that is Lord of Memories. The dark melodic mix doesn't waver for a second of the album's 42 minute duration and remains sombre and eerie from start to finish like an Edgar Allan Poe story. Something that's in no small part down to the huge amount of time, effort and detail that evidently went into it's mastering. From start to finish Spirit Remains is beautifully satisfying on a multitude of levels. I really don't know how they're going to top this next time around.

Go preorder it from our friends at Bilocation Records now!
~ Jay