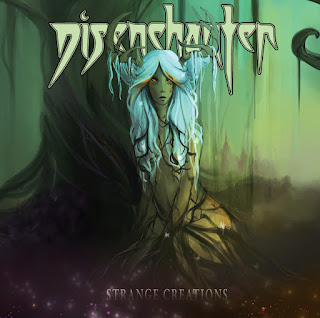 I first got clued-in to Disenchanter with their jumbo-sized EP at the start of last year, On Through Portals (reviewed right here), which followed their debut EP, Back to Earth, by about half a year.  The Portland-based group has now issued their first LP, and over its approximately hour-long run-time, Disenchanter show how the work put in on those first couple of releases helped them hone their skills.
From the first track, "792", the band is operating with high efficiency, finding room to let things grow into what I'd call 'epic' proportions if that term didn't have so much baggage.  Instead, I'll settle for 'glorious', with the soaring vocals putting me in mind of the better parts of Electric Citizen's Sateen album, while the balance of harmony and aggression on the instrumental side has a dynamic of its own.  Disenchanter seem to have picked up some extra speed since their last EP, with battering rolls of percussion, slick-fingered chord progressions, and some use of overlapping vocals all working to keep things vibrant without taking too much away from the heaviness.
The band also seem to have found room for extra styles in the space of a full album, with "Green Queen", for example, being a heavy rocker with plenty of '70s style slathered across its riffs and chorus arrangements.  At its heart, though, the album stays true to the doom-power of their earlier efforts, just turbo-charged into jolting liveliness.  Their skill with keeping long tracks interesting is well intact, and as their first album, this one will be standing strong for years to come.  If you haven't come across this band before, now's a great time to get into their music.
~ Gabriel

For Fans Of;    Blood Farmers, Druglord, Jess and the Ancient Ones, Salem's Pot, early Windhand