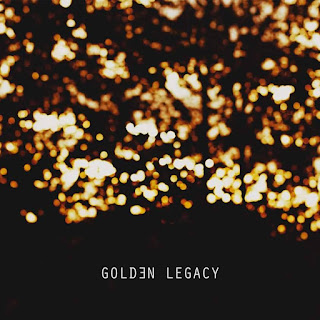 Chaotic dissonance rarely comes with a hint of beauty, but Golden Legacy seems to have found a wonderful balance between the punching assault of guitar chords of Yanni Georgiou combined with the hammering drums and beautiful voice of Lorena Cachito. Hailing from London, the duo have spent the past year touring throughout Europe, hellbent on reaching a wonderful mixture of both insanity and harmony. Their self-titled EP begins with "Saint Dark", an unforgiving track with lyrics that are out for blood and revenge, spilling seamlessly into the improvised "Gold Meaning Variations", which was recorded to show off the band's talent and power as a live band. Improvisation is something the band has incorporated into their live shows, occasionally creating a 40-minute sprawl of noise and fury. Mirror crawls out from the improvisation beginning with timid vocals that slowly burn into something more angry, but this truly shows the band's main strength, creating a monstrous atmosphere with controlled vocals pulling them away from the extreme chaos present with most noise rock groups. Closing out the EP is another improvisation, "Gold Steps" where bustling guitars and drums became intertwined with the seductive vocals. A digital release will be available January 2016 with vinyl available later in the year.
~ Richard