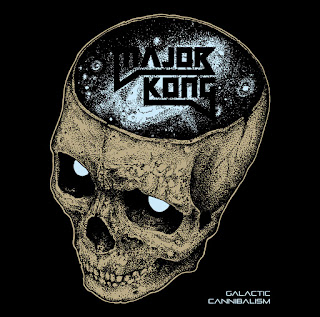 The latest release from those Polish heavy doomers of Major Kong is this four-track EP, hitting nearly half an hour of strident tones and deep grooves.  In keeping with the band's tradition, the songs are instrumental in nature, letting feedback, pinched notes, and just a couple of audio samples take the place of the howling vocals you might expect to find entrenched in the sludgy tones of bass and guitar.  There's also some pedal effects like phasing thrown in a few times, as with the gurgling warble of "Diabolic Mind Control", but for the most part, the music is reliably gritty and straight-forward.
Drum-wise, things are tasty, with perhaps a little more experimentation than usual going on in the beats and fills, and the cymbals are worked to produce some rattling dins that fit right in with the EP's general mood of violence and volume.  The four tracks make a good jumping-in point for those who haven't yet heard one of the band's full albums, with riffs and heaviness in truck-loads, while also serving as an appetite-whetter for old fans until MK's next LP comes along.
~ Gabriel