From The Deep, Dark Depths... 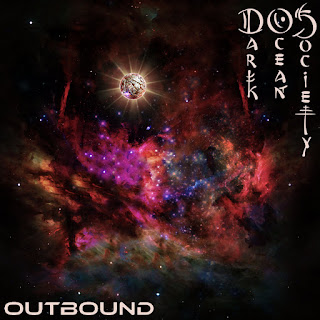 Dark Ocean Society's sole member C.M. Tedor creates a break wondering soundscape for his second record, Outbound. Beginning vocals on opener "Tides of Time" may suggest a break, unmoving tone until a screeched vocal shocks you unveiling a much more demonic overtone. Guitars so permeated with distortion create a sound stretching the covering a plane never considering going backward for a second as they spiral more and more until a fantastically abrupt end. "Outbound" follows with more bleakness with jams continuing to overflow your speakers until the sounds of a keyboard mimic something akin to a spaceship drifting further into the abyss of a frozen desert. Chanting echoes on Expanse end the meandering trip with sounds of crashes, clanks and angrier vocal bound together by a steady guitar. Memoriam slows the guitars and speeds up the drums for a wonderfully doom filled track followed directly is Exit with sped up guitars and images of an old world of yore with fluttering instruments for a sonics filled ride that needs to be heard. Portals shows off exceptional instrumentals leading into the final track "Ghost of lo", my personal favourite, with ease. A slow growing trippy, acid soaked hypnosis meant to be heard with headphones in seclusion at 1 am. Each perfectly named track bleeds into the next with ease. A constant isolated feeling of sounds woven together skillfully is only broken by the sound of wind sweeping and moving into nothing. A stoic and stunning work.
- Richard


For Fans Of; Neurosis, Isis, Cult of Luna, Tool, (post Syd Barrett/pre-Dark Side of the Moon) Pink Floyd