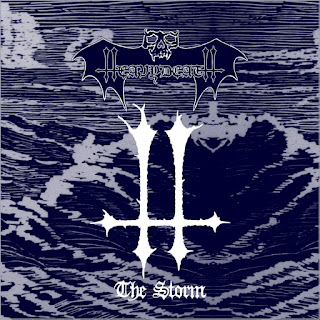 Making with yet another in their long line of publicly-available demos, Heavydeath continue developing their style while retaining rough edges to the tone and production.  Thick riffs and dominating reverb play to the band's usual strengths, while the drummer gets a few spots in which he comes out beating harder and faster than their average crushing crawl.  The band also plays with some shiver-inducing tones and distortion on the guitar, and distant-mixed vocals provide an otherworldly vibe in "One Eye", while "Journey to the Shores of Death" is a rich atmospheric slab of funereal aching.
Even if you're well-accustomed to the band's modus operandi by this point, it's worth checking in on them with this one to stay informed on what Heavydeath are trying out, and to get a sense of where they might land musically once their next album drops.  Very good stuff, as this band always seems to deliver.
~ Gabriel