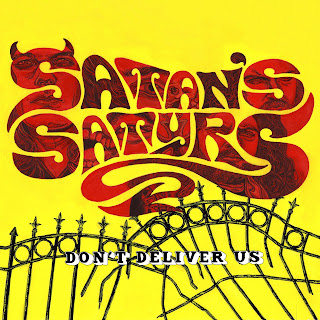 As to be expected, Satan's Satyr's are back with their own unique blend of doom metal and sleazy rock and roll. I have to admit that they've grown on me since the first time I heard their music. That very first go around, I wasn't impressed. Over the years though, things have changed between us. The ferocious attack of the bass and guitar, with the higher pitched vocals can create one hell of a catchy combination at times. That was probably one of the things that made me keep giving them a try, along with the satanic heavy rock on Adderall groove that makes itself apparent when the mood strikes. On their new album "Don't Deliver Us", you're given exactly what you'd expect from these guys. With howling, chaotic guitar lines being the driving force behind most of their work, they storm to the forefront from the very beginning of the album. I was a particular fan of the second track “Two Hands”, kicking off with a chugging bass line and those trademark vocals the song is high energy all the way through. Once you work your way into the second half, a garage rock vibe starts working its way through all of the buzz and fuzz. As it rounds out, the tracks gets more traditional, but still with that same grit we all know Satan's Satyrs for having. For me, this is one of their best albums to date, showing off what makes them such a recognisable band in the first place. You can pick up some physical copies from Bad Omen Records still, or get that digital fix over at bandcamp.
~Skip