A Whopper of a Behemoth... 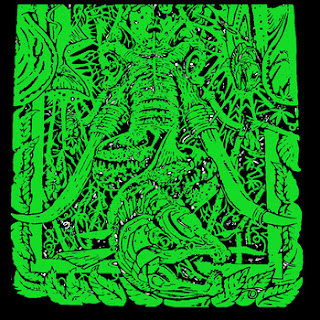 Listening to metal most of the time, I come across some rather crazy album artwork, namely albums depicting something akin to the name of the group. When I was introduced this week to Mammoth Salmon I wondered to myself if such a name would lend its services to the album cover. Well, as you can tell from the above image, we have one hell of an album cover on our hands. I mean, that bad ass salmon is coming right for ya! Followed by an even more bad ass Mammoth!
In the history of two-person bands (especially those specializing in stoner metal), I'm not sure I've heard anything as raw, yet coherent, as Mammoth Salmon. Blasting through three sludgy and smokey tracks on their latest EP, the group roll together elements of classic and stoner rock for an overall rough, garage quality sound that continuously hits hard, but also sees instances of twangy guitar shadowed by snare-heavy drums. Early listens of the recordings bring to mind the ever popular riffs and chord-work seen today in bands like The Sword and Acid King, albeit not nearly as progressive or structured. While none of the songs outlast their aural welcomes, the band, at times, have extended periods of noise that never really build back up to a crescendo or crushing segue, but, rather, end abruptly or fade out in feedback. Keeping in mind that the recordings are early versions of what could easily be prolonged into much more concise songs, Mammoth Salmon clearly have the chops to produce a heavy sound that is not to be taken lightly. When the responsibilities fall to two people, I can't help but be impressed at the writing and the way in which each song compliments the prior without re-hashing the same aesthetic over and over.
~Joe

For Fans Of; Big Business, The Melvins, Gypsyhawk, Burst, FiveWillDie