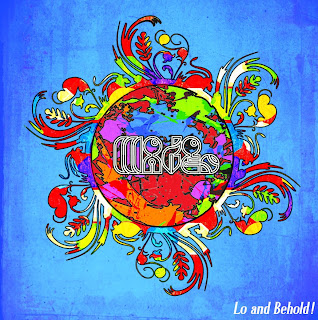 Last night I had a conversation with my old man on record stores and digital music distribution. Ironically he was incredibly enthusiastic about the possibilities of the internet and I was a lot more sceptical, but I do have to give him credit though. It can be wonderful by bringing us bands we would've never heard of otherwise, bands like Mojo Waves. Also, the anonymity of the internet can be incredible (if you don't put your name underneath a review that is), especially when it comes to having guilty pleasures, which category Mojo Waves pretty much fit too.
Mojo Waves' Lo And Behold! is one of those records you really enjoy but don't really know whether you want to share them with your friends, because you could all really rock out to it or they just wouldn't know how to handle it. It's, as we call it in Dutch, 'fout'. Literally translated to 'wrong,' fout is something that isn't really acceptable but still really awesome. Like snakeskin boots, for example. Mojo Waves fit that category by creating fast paced, groovy garage rock 'n' roll with fitting high pitched vocals. How can that go wrong, you might ask? You don't ask, because it can't go wrong. It's great.
The band's got their own sound to it, which is enhanced by the fact that all members are playing towards the same goal; they all want to make their music fout. The sound may even best be described as stoner glam. Listening to this I just couldn't keep my mind off the 80's. Something I sort of mind, but not really. It's too much fun to only think about the too tightly fitting clothes, man make-up, The Spaghetti Incident and.. yeah let's stop there. My point being: Mojo Waves are a whole bunch of fun to listen to, and a whole bunch of fun might just erupt when you bring 'em to a party, so let's!
~Ruben

For Fans Of; Eagles Of Death Metal, The Black Widow's Project, Rainbows Are Free, Rainbow