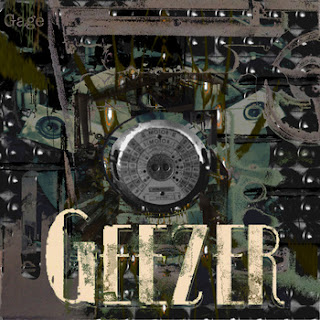 Geezer is like a well-oiled machine. One that keeps moving along, churning out twangy, fuzzy stoner rock without a hitch. At the core of this machine lies a burning fire fueled by nothing more than the desire to rock out and thrash until amps are blown and instruments are destroyed. A raw force in music, Geezer could care less how they are perceived. They just want to produce their own brand of rock that speaks to who they are; a brand of rock that destroys norms and keeps listeners wondering.
Hailing from New York, a traditional stomping ground for old school hardcore and metal, Geezer explode on their latest offering as though they have been holed up in Death Valley, watching the vultures circle and the sun bleach animal bones. Spacey riffs, dual stream shredding and raspy vocals channel the power of classic desert gods Kyuss; however, Geezer takes these elements and transforms them into something much more powerful and intense. Keeping many of their tracks under a considerably calm pace for minutes at a time, Geezer erupt at crucial intervals, creating a sonic boom of sorts amongst the note-by-note wail of the band's guitars.
"Ancient Song," a pure rocker in the early going, transitions from heavy-hitting to bluesy in the blink of an eye, leading the listener on an audible car chase that zigs and zags its way through varied rhythms that tell as much of a story as the lyrics. "Thorny" serves as the album's best track, akin to early Queens of the Stone Age and presenting a toe-tapping sound with hushed and almost pained vocals. The hardest song on the album (and coolest title by far), "Ghost Rider Solar Plexus," ramps the action back up to 11 and highlights the record's diverse and skilled drumming. Closing out Gage with instrumental gem "Dude, It's Molecular," Geezer again pick slide their way toward a beautiful and haunting finale that abandons the listener too early.
Having garnered the attention of several music review outlets out there today, Geezer is quickly becoming the dark horse of the stoner scene. Given the right exposure, Geezer could soon be on the fast track to blowing minds across the world.
~Joe

For Fans Of; Kyuss, Queens of the Stone Age, Screaming Trees, Fu Manchu