Return Of The Witch... 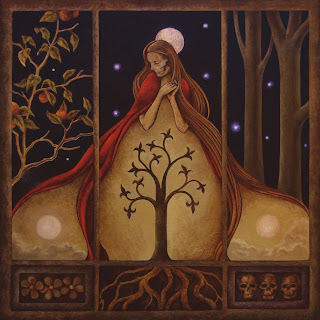 I must admit, I'd not planned to put this up until the whole album was actually available, but it was just too goddamn good to sit on, plus what better way to start your weekend than sit back and bathe in the warm sonic delights of Germanys finest doom trio?
When Renee told me Mountain Witch had once again reformed and he was hitting up the studio, to say I was excited was somewhat of an understatement. Both Scythe & Dead Horse and the Self Titled albums have pride of place within my record collection and rarely find themselves further than a foot away from my turntable. But that probably has something to do with the fact I possess two copies of both and the test presses, so you could really stand anywhere in my house and not be all that far from these guys. Yeah, I guess you could say I'm a a fan.
So the prospect of a brand new album, being backed by the good folks over at This Charming Man Records pleased me no end. But this was towards the start of the year and I've had to spend month after month eagerly awaiting the new cuts of inevitably fuzzy and retro German doom. So last week when I got a message to tell me to check out the new track I felt like a weight had been lifted. Months of anticipation had drawn to a close, and I just hoped that it would be the same caliber as the old material...
So whats new with the Witch? Well, pretty much everything to tell you the truth. Where the previous outings sort of straddled both the acid rock and dooms genres this new approach sees them step slightly away from the former and place a foot firmly in classic rock instead. Not to say that they've abandoned their acid rock roots entirely, hell no. That haunting groove and occult feel is still there in bucket loads, but now their sound focuses more towards that whole tone that Sabbath so beautifully crafted over four decades ago. It's darker, more somber and arguably more textured than before. There seems to have been a real and tangible progression in their song writing. To the point where you could be excused for mistaking them for and entirely different band altogether. Thats a pretty impressive feat being as they've managed to completely alter their sound without biting off more than they can chew, which is a hell of a rarity and seldom pays off when attempted by many a band. The other most noticeable aspect of this new material are the inclusion of vocals. Yeah, the past records had a smattering of lyrics here and there, but they were never really the focus and took more of a back seat behind the fuzz. Which worked great, as they flowed more fluidly along with the tempo and produced a beautifully eerie ambiance. But now they guys have really stepped up their game and given Renee a real front man status. It really does pay off too, as the same dark creepiness resonates through his lyrics as before but now they really work effortlessly to paint a picture for each song.
At the end of the day the chaps have taken a punt and tried something new and substantially different to their previous works, but it's worked fantastically! So if you, like me, were bitterly disappointed with Sabbath's 13 and just longed for them to return to their roots and crank out something gritty, dark and fundamentally old-school then you really should pick up Cold River because it ticks all those bloody boxes and more. It's bloody brilliant!
~ Jay