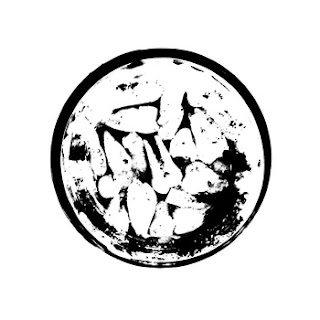 After a fair stretch of reviews focusing on bluesy desert rock and doom metal from North America, I have once again found myself basking in the midst of pure European sludge. This time around it is Spain's murky bottom-toners Dispain with their latest album, Maxilla Prolabitur, an effort boasting simple down-tuned chords, punchy drumming and contrasting vocal efforts that (at times) offer an interesting listen.
First off, Dispain has a lot of interesting aesthetics going on with this release. The album cover appears to be a jar of pulled teeth while every song title is a roman numeral ("27," "26," "19," "20," "24," "21," 25," and "17," specifically). With such a bizarre exterior, I was anticipating an equally strange listen; however, Dispain has a fairly palatable sound that draws inspiration from prog rock, punk and drone. From track to track, the band keeps a relatively familiar pace that doesn't necessarily invoke the listener to do much of anything with their body to acknowledge that they are hearing music and moving their body in recognition of the action. This anomaly (thankfully) is broken up a few times across the album with quick-paced riffs and drumming that truly speak to the band's fondness for punk.
The largest shift in dynamic on the record is what sounds to be two sets of vocals. For a majority of the time, deep moans and gravelly barks rule the duties, but these soon give way to shrieks and yips for the back half of the album. Not that the vocal switch was a deal-breaker or anything, but, given the obvious deliberateness of the transition, each song should be stronger than it sounds. Again, the practice does not come off gimmicky, but the band could possibly benefit by finding its footing and committing to a (vocal) sound that suits their music.
As the band's instrumentation showcases their truer talents, it should be noted that hum-heavy guitars and bass offer up everything a true sludge fan could ask for as each track maintains a fairly lengthy running time that never turns mundane. Again, the faster parts plotted in throughout are a nice touch, but seem to somewhat cover up what the band is really attempting to push to the forefront of their work. In time, with a little soul searching, Dispain could emerge as one of the greater sludge acts currently around, but, until a clear direction is chosen, could get hung up on experimentation for far too long.
~Joe

For Fans Of; The Howling Wind, Man Is The Bastard, Nihill, Inter Arma