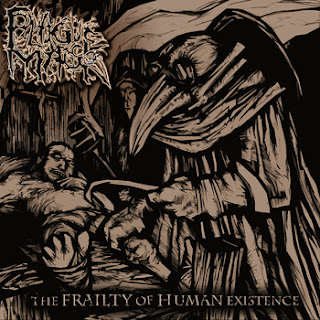 Upstate New York can be a cold and unforgiving place. Almost as cold and unforgiving as Plague Mask, a grungy black metal outfit hailing from Syracuse that bares some serious fangs on their latest release. Although often blasting their way through each song, Plague Mask occasionally tip their hats to musical stylings akin to Norwegian death metal and prog rock. A unique blend of heavy riffs and spacey transitions make Plague Mask an intriguing band, one that knocks around the foundation of metal and rock, shaking loose a tough sound that stands up on both sides of the spectrum.
The most noticeable aspect of Plague Mask are the growling, animalistic vocals that seem to work just right despite any tempo change on the record. Slightly high-pitched, the vocals compliment the wailing, pedal-heavy riffs and blast-beat drumming. In the moments between lyrics, Plague Mask does not simply settle for repetitive hooks or rhythms. The band makes it a point to try something different at every turn. While some of these efforts fall a bit short or feel a bit tried, the overall effort is stronger for having the experimentation.
My favorite track off the EP, "Botched Swimming Lessons," is indicative of the range that Plague Mask is capable of and keeps a fast pace interspersed with odd breaks and tempo switches that call for head-banging and swaying at the same time. As quickly as it starts, the track ends, which is a little disappointing given the rest of the EP seems to possess tracks that aren't conformed to any sort of time limit by the band. Taking into consideration the band has an obvious flair for speed variation, "Botched Swimming Lessons" could simply be a work in progress or a song that the band truly feels works better at an unrelenting pace that screams pure brutality.
Suspecting the band has plenty of rage left in them, I am eager to hear a full-blown work from Plague Mask. One that will allow the band even more freedom to try out some sounds and speeds that can gradually turn into real rockers and thrashers. Either way, I'm listening when it arrives.
~Joe

For Fans Of; Converge, Abigail Williams, Arsis, At The Gates

The Frailty of Human Existence (name your price)