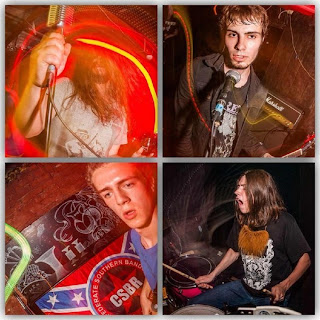 Wow, these guys are on the ball! Not only do these guys keep the Russian stoner scene alive by the means of magazines, a radio station, online stoner tv, scheduling gigs all over the country and putting up their own site, they also have started this band earlier this year, recorded this EP during summer and will be releasing it September 22nd. Oh, and did I mention their singer had no musical experience whatsoever? These guys..!
CSBR Experience (Crab Stoned But Rocking, a monniker ther truly deserve) go hard and go fast, very much like early stoner acts such as Slo Burn and Unida. In spite of a lack of desert, the tundra seems to be an excellent replacement for it because their EP, Feel The Heat, definitely has the desert feel, just with a little cool twist. The music's loud, groovy, catchy and dirty. Just like it should be.
Even though CSBR Experience hasn't even reached 1 on the age-o-meter, they already have a pretty solid sound that can be called their own. It definitely is no reinvention of the wheel, but who can blaim them as they've been playing only this long (short?). Anyway, what they're playing is still pretty common stoner rock, but it's their stoner rock, and most of all; it's good stoner rock. It's fun, it's loud, it's mean and it's stoned as a crab. I really do love saying that by the way.
Oh yeah, and remember that singer that had no experience at all before starting at this band? Yeah, he's killer.
It's a hell of a debut, and it's hella cheap (just 3 bucks) so just go and buy it. Yes, it's Russian and if you're one of those peeps boycotting anything Russian because of the anti-gay laws you're just a dick denying honest, hard working people a living. Not every Russian is a homophobe, so while it's perfectly fine to piss on Putin, don't piss on these guys. They deserve some praise.
~Ruben