Nothing To Be Ashamed Of... 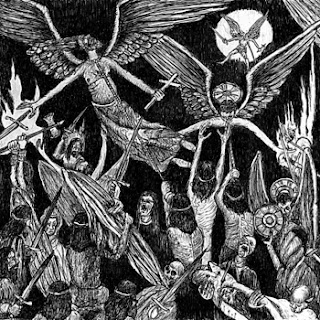 The Midwest takes a bad wrap for pretty much everything under the Sun. I contest that when it comes to metal, however, St. Louis' scene is still strong and full of more rage than any posh "thrashers" from the coasts. There is plenty to be pissed about right here in America's Heartland, and Good Die Young Music's The Lion's Daughter is that aggression incarnate. Currently working on a new split with St. Louis folk outfit Indian Blanket, The Lion's Daughter continues to destroy on a fairly regular basis, mastering their unholy, unforgiving brand of sludge metal.
On Shame On Us All, the band rips through a solid offering of blistering drums, ripping guitars and devastating vocals that continuously crushes and nearly induces physical pain from sheer brutality. There is no slowing down with The Lion's Daughter, as each track gets louder and faster than the last, the band creates an impressive effort that could stand against any big name in the genre today. Given the talent and raw nature of the group, the music never truly shows any weak spots, simply working on a number of levels that adds a dark, 'we-don't-give-a-fuck' ethos.
Pain, suffering and human ignorance serves as a strong creative element for the group, fitting in line with the music that is nearly as grim. Despite the black cloud aesthetic, The Lion's Daughter is still a band that is fun in the metal sense. Offering up a cover of Nine Inch Nails' "Mr. Self Destruct" from the band's 1994 release The Downward Spiral, The Lion's Daughter places an interesting twist on an industrial classic that still speaks to millions of music fans across the world.
Energetic and looming, live performances are nothing short of an auditory riot. As the band continues to create and firm up their skills, they are looking toward a path that is sure to gain recognition amongst many outside of the St. Louis area. Given their next release is a split with a genre totally on the other end of the spectrum, The Lion's Daughter is clearly looking to combine their efforts with others they respect, despite a drastic difference in sound. It's this mindset that could just make the band more unique than even I suspect.
It should also be noted that the cover art for Shame On Us All is an original piece of work from St. Louis artist Coby Ellison, an extremely talented dude that will hopefully find himself featured on our new artists page in the near future.
~Joe

For Fans Of; The Arusha Accord, Liferuiner, Heights, Nails

Shame On Us All (name your price)