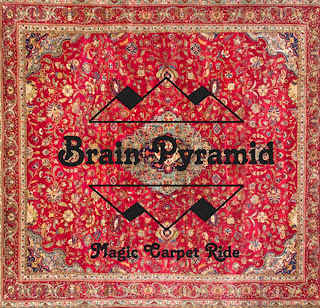 To be honest I am not quite sure where to start on this one. I don't like to start a review of with negative  criticism because it makes the whole review seem negative. That's something that Brain Pyramid definitely doesn't deserve, but the main problem I hear in this band is also the most apparent feature of Magic Carpet Ride. What I'm getting at is the guitar play. Not because it's bad, it's not, but the guitarist knows that all too well. Instead of a great piece of craftsmanship made by a bunch of people trying to create something together, what Magic Carpet Ride offers us is a good drummer and a good bassist working together overshadowed by a good guitarist breaking the flow by trying to show exactly how good he is. He can play alright, but he doesn't show that he's a good musician.
It's a shame because the only thing that Brain Pyramid need is guitar play that complements the music. As I said, the drums and the bass are working tightly together, creating something very solid. The whole trio has got the feel that is Brain Pyramid, the vibe is just imbalanced. Just the one change would take the whole band to a different level, a level of awesome (mostly) instrumental blues rock. I'm not calling for the dismissal of the guitarist, I only hope he sees that the band needs not stringy trickery but a guitar player and takes a chill pill. Don't mean to be too harsh, but for the sake of the band it's nessecary.
Still, Magic Carpet Ride is a decent record. It's got it's solid features, it's got it's problems, but the bluesyness is captured. It's got all the potential, but it's not quite there yet, and I really hope Brain Pyramid will take a big step forward on their songs to come. It's got the means to do it, it just needs to be done.
~Ruben