Dukes Up Against The Devil... 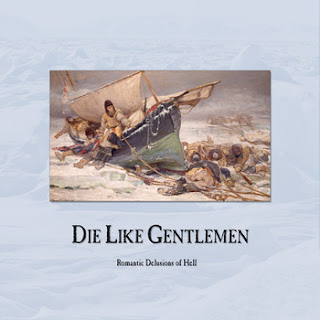 Every time I come across something sludge-related, I ultimately assume heavy as fuck and slow enough to bore a snail, but, lo and behold, the fair city of Portland, Oregon has prevailed again. I'll go on record now and classify Die Like Gentlemen as Coastal Sludge, a worthwhile blend of fuzzy guitars and bass with march-like percussions that don't try to deafen, but, rather, instill a sense of epicness that this world can barely handle. I know that sounds like I'm fluffing this shit up, but chances are you haven't even heard DLGyet, which is your first mistake today.
Perhaps what works best for DLG on Romantic Delusions of Hell is the attention to raw power, both in the instrumentation and vocals featured on the album. Maintaining a fairly simple and well-paced rhythm, DLG deliver each track as though they are rallying an army to cross the treacherous oceans and pillage whoever and whatever they come across first. Smooth, almost hypnotic vocals work their way across each track, bringing to mind classic stoner rock of the 70's and early-era Danzig. The experimentation in each song is also a nice change of pace from many offerings in the sludge genre, highlighting guitars above all else and providing several minutes of pure rock that demands hair-twirling or (at the least) some solid head-banging.
An early track on the album, "Setting The Features," possesses melodic riffs akin to prog rock, another audible shift that deepens the complexity of RDoH as  whole. Perhaps it is not fair to even classify DLG as a band that has developed its own brand of sludge rock, but could more accurately be recognized as innovators of rock that fully grasp the notion of brutality in all of its forms. The work put forth on this strong EP should be noted and recognized by those aspiring to create something as respectable and heavy.
~Joe