Raus! Play Me Some Strauss... 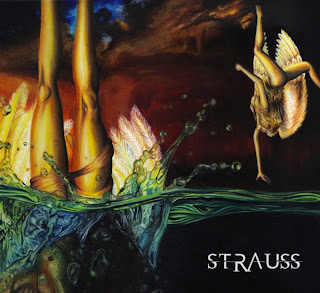 Strauss know how to grab your attention right off the bat. First, there's this unbelievable cover. I mean, it's damn near one of the kitschiest things I've ever seen (as an art student, that really does say something) and I absolutely love it. Second, Strauss' music is so up in your face that you cannot possibly miss anything about it.
What we're dealing with here is a curious combination of metal, sludge and stoner. It's got the metal feel and structure of bands like Pantera and early Metallica, the hard hitting fuzz of the likes of Red Fang and the mean dirtiness of sludge acts like Kylesa. Even though it's got these familiar elements, this stew of tunes is quite unlike any sludge/metal/stoner acts I've heard before. It's three genres moulding and grinding and leaping in and out of each other.
And all that out of a band that's only two years old! Hell, when I was two years old I could do fuck all (and whether I can now is... debatable) let alone bring forth such à coherent bunch of raw energy. Raw it is, as well as coherent, I am astounded by the level of team-play that's going on in this really young band. These guys play together like they should. Sounds simple enough right? No, wrong, that's really hard. These guys nailed it, give 'em some credit, go on over to their bandcamp, listen to their awesome music, download it (it's free!), and look forward to their next records. I've got high hopes for the future of this band.
~Ruben