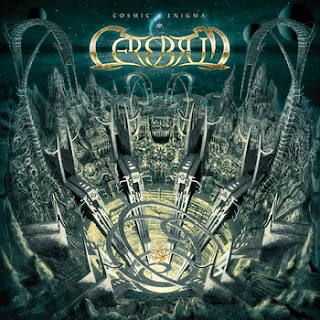 My return to reviewing European-based bands continues this week as I take a listen to Greek tech metal outfit Cerebrum (featuring Nile drummer George Kollias). While there's a ton going on in the band's second album, the meat and potatoes of it all revolves around mid- to late 90's thrash and tech metal that gave listeners blisters on their fingers just listening to it. There's something to be said about Cosmic Enigma in that it immediately gave me a sense of nostalgia from the opening riff, reminding me of all the great metal that got me into the bands I enjoy today. Along with the trip down memory lane, this record also did a great job of making me wish I had long hair so I could twirl that shit as each track hammered through my speakers.
From start to finish, metal fans will identify with Cerebrum on a lot of levels, namely through their constant use of tempo changes, blast beats and hoarse, commanding vocals. Hyper-shredding and finger-tapping keep the album moving at light speed with only two, brief instrumentals allowing for any sort of chance for anyone to catch their breath. Interesting segues pop up in a few standard tracks as well, sounding much like fuck-infused acid trips that are suddenly stabbed to death, lending way to the brutal tech elements that preceded them.
On the front half of the record, songs such as "Utopian Freedom, Dogmatic Truth" and "Dream Infusion Side Effects" maintain a double-bass groove overlaid with numerous guitar solos, screeching chords and drumming that sounds like a four-armed man is behind the skins. Latter tracks like "Enter The Void" and "Chaotic Orbits Align" rip and explode from second to second, unrelenting yet catchy in that way that only tech geniuses can create through their dedication to playing guitars in the most masterful of ways.
Cerebrum is certain to gain a lot of notice with Cosmic Enigma as it serves as not only a great, modern metal album, but also a piece of work that can be respected by metal fans young and old. Consider it a history listen that is best listened to at a ridiculous volume.
~Joe