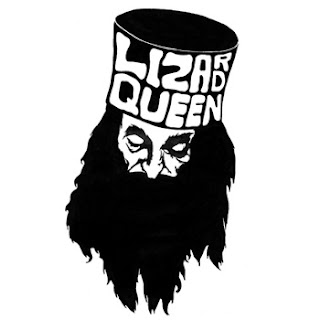 It wasn't too long ago that I reviewed an Italian stoner band by the name of DEEP and their impressive debut titled Vol. 1. A grooved out and slower album, Vol. 1 was a lesson in how stoner rock can transcend a number of tempo and mood changes to achieve an eclectic yet fathomable sound. While DEEP spin-off Lizard Queen is much faster, riffier and more traditionally rock and roll than its origin band, the group is in no hurry to churn out quick burners that leave little impression on the listener. In the Lizard Queen camp, slow and steady wins the race.
A mix of simple drumming and distant, echoed vocals serve just fine on the effort, but the true talents lie in the album's guitars. Occasionally, repeated chords and verse work drag, but killer solos and some pedal experimentation help breathe life back into the majority of the tracks. Buzzy and noisy are descriptions best kept in mind when listening to the effort, but Lizard Queen are not as simple and one-dimensional when it comes to their music as those words may suggest. A heavy dose of finger-tapping notes appear under the effects of the pedals, but the practice pays off and maintains a sound that band can truly call their own. Bass playing on the effort is also a notable standout, never branching out into much complexity, but also embracing a fuzzed out tone that works alongside everything else going on at any given time on the record.
Recent years have seen an increase in stoner groups nodding to topics like ancient goddesses and epic half-men, half-monsters that rule other realms, and that's all fine and good, but Lizard Queen is strictly about getting down to brass tacks. Comparatively, Lizard Queen could be said to sound like a lot of bands, but that assessment would simply be cheating a talented act out of the respect they deserve on an early work that is something special.
As always, these are my humble opinions, so, please, check out Lizard Queen and let us know what you think.
~Joe