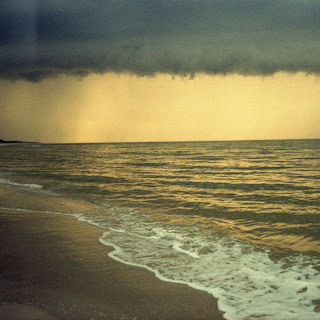 When someone comes at me with 'folk' as a genre, I will more often than not spit in their face. If they also happen to be wearing a bobble hat, thick black glasses and an ironic moustache I may also rock them in the balls and beat them with a tire iron. Not to say that I don't like the genre. No, I hate it. That being said, if like here it's prefixed with 'alternative black death metal ambient...' then I will shake you by the hand and request more information. Pozne (or Ponze, as I've been thinking they're called all day) are a bit of a mixed bag if you haven't guessed that already. Oh yeah, I don't know where the keyboard shortcut for the Z with the little thingy above it is, and I cant be doing with pasting it a hundred times. Anyway, I digress. It would be safe to assume Alameda 3 is a bit of an experimental/prog project. It's the epitome of discordant, although it does happily fall shy of be unlistenable, like some of the stuff we occasionally get sent. You can picture the stuff... Hipster shit, which is basically a kind of avant-garde nightmare where it sounds like someone's put a bag full of spanners in a washing machine while TV static plays at full volume in the background... Urgh. Anyway, it does have all the feel and texture of a quite a potent and questionable acid trip, in good ways and bad. Nice catchy riffs poke their heads out every now and again and the ambient moments are truly beautiful. The shere sporadicness of it all may be more than most can handle, but ya know, what ever floats your boat...
~ Jay