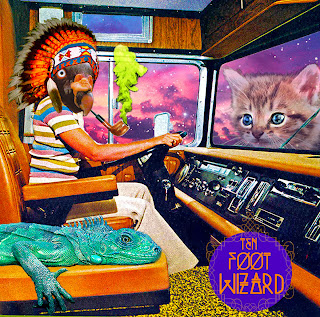 You've gotta appreciate it when someone really goes the extra mile and puts the effort into album artwork. Especially when the end result looks like a collage by Zooey Deschanel representing a bad acid trip through the mind of Ted Nugent. Sure, you can look at this cover and instantly think, "Ah, it's gonna be all psych..." and you'd be excused for that. But in reality, thats pretty far from the mark. In fact, what these four Manc's are offering up boarders more on modern dirty southern rock than anything else. Actually, modern southern rock and the nice occasional layer of good ol' classic hard rock slapped on the top. Not so much a mash of the two, but actually full on layered. While the drums and bass are chugging out a fat wall of either early Metallica like thunder or Fu Manchu furiously, the guitars dip in to the 70's an pull out some whaling ZZ Top esque licks. I've never quite heard this sort of approach before, its usually all or nothing with bands. But the consciously or not Wizard have seemed to try something a little different here by giving us both barrels at the same time. They've even mixed it all up with the tempo. Right from the get go, the album roars out of the gates in an upbeat fashion, but as it progresses the gloomy clouds seem to loom in and things seem to get a little dark in places. Not full on doom, just a touch sludgy... kinda like abruptly switching from Clutch to Down. It's not jarring but it does kinda of blindside you a bit. It's all just so unexpected, after you've been tapping your foot along or possibly air drumming (don't judge me) it's just not what you'd expect. But hey, fuck it, they've got it to work so why the hell not! If nothing else, it just proves these guys can turn their hand to a whole lot more than they initially let on to. I can't wait to hear more from the Wizard, they show buckets full of promise and they sure as hell aint lacking in the talent department. Listen to this album from start to finish and try and tell me these chaps aint going places... I've got a feeling their own brand of hi octane dirty rock n' roll is gonna turn a few heads before too long...
~ Jay


For Fans Of; Planet Of Zeus, Orange Goblin, Down, Thunderfist, He Is Legend