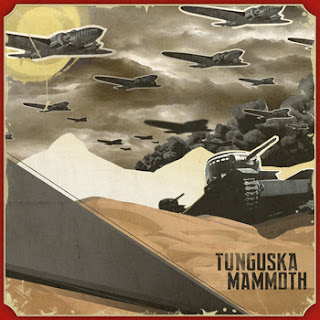 Canada may be a neutral country when it comes to global violence, but their metal bands have some neat ideas about mammoths unmercifully destroying all of humanity. That's right, this latest metal opus to land at our door contains 10 crushing, thrashing, shredding tracks that all revolve around a global assault by giant mammoths, leaving the planet virtually void of mankind. The question many of you are probably asking already at this point is whether or not such an epic concept can actually transfer into a solid musical product. Fortunately, Tunguska Mammoth eases all concerns by taking a crazy idea and giving it a fitting soundtrack that could easily surround battlegrounds full of tanks, slews of soldiers and bloodied, crazed mammoths.
Starting off hard and heavy, Tunguska Mammoth rip into a set of chug-a-lug guitars and hard-as-nails vocals that quickly help the listener realize they are in for one hell of a trip. The band possesses a confident sound that is comparable to many major metal acts signed to major labels, but what sets the group apart is the playfulness they put into their musical ideas. While bands like 3 Inches Of Blood and Valient Thorr have explored these "epic" scenarios before, Tunguska Mammoth spends a little less time striving for the high notes and plethora of solos and, instead, just play as fast they can with as much power as any band I've ever heard.
The deeper into the album the listener gets, more and more influences become apparent, namely new school hardcore. Breaks and tempo shifts often remind of Hatebreed, In Flames and (to a lesser extent) breakdown junkies Terror. Note that these influenced sounds merely guide the band's music as opposed to serving as a blueprint. Where the group has mastered a rough-and-tough rhythm for the majority of their work, they also display fantastic moments of musical exploration that could stand up against masters of the genre today.
Rounding out the album with as much ferocity as they started with, Tunguska Mammoth don't hold back, even journeying into tech metal territory led by blistering drums and slide note duels. Painting a final picture of a world destroyed and ruled by animals once again, the band leave little unexplored (conceptually and audibly). A nice change of pace from the standard hum-drum concept albums that are often misunderstood (or just don't make any fucking sense to begin with), Tunguska Mammoth's self-titled work is the crazy, fun metal record that 2013 has been waiting for. So strap in and listen to what the world sounds like trampled under hairy beasts.
~Joe

For Fans Of; Nile, Mastodon, High On Fire, Bongzilla