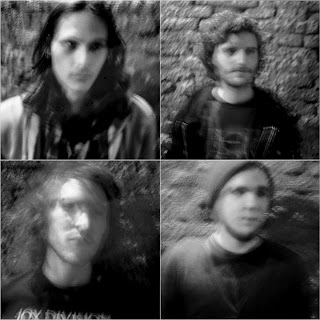 My punk knowledge is somewhat limited. Some of my earliest musical purchases did consist of Black Flag and Refused, but generally speaking I'm a dunce when it comes to the subject. So with that secured in the back of your mind, here's me view of Austria's very own Dead End Friends.
To be fair, and with some luck on my part, this little quartet aren't strictly punk. Not in the original sense of the word anyway. They're much more. An amalgamation of grunge, punk, garage rock and a touch of hardcore would be more apt. Predominantly grunge in style, but with a punk ethos. Catchy yet strangely disjointed, much like The Pixies. Sorry, just, Pixies. I know how much that grates on those hipster types. None the less, thats where their sounds lies, in that slightly anarchic early 90's tone, and despite not being an avid follower of the genre(s) I must admit, I'm pretty impressed! The EP takes a few minutes to really find its groove, but when it does, it finds it with real panache. Dark and sombre whaling and screams echo and meander through even darker and more sombre riffs coated in reverb, fuzz and feedback. With a pace that switches pretty seamlessly from a post hardcore pace to a pure ambient rock one, you can kind of see my predicament when it comes to slipping these guys in any sort of genre. It's experimental, I'll give them that, but fortunately its not precocious along with it. Something some bands of this ilk often fail to avoid. So needless to say its unique, I'm damned if I can name another band that sound even faintly like them. I've not entirely decided if thats a good thing or not yet, but at the end of the day I'm actually really digging it, and coming from someone not all that committed to this sort of thing usually, thats gotta count for something right?
~ Jay