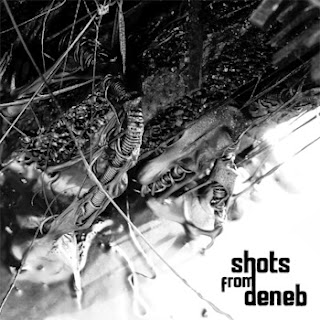 It's not often you find the perfect blend of space rock and speed metal, but, luckily, Poland's Shots From Deneb have come through and churned out a killer album that flawlessly blends the two sounds. Hitting your eardrums like a Mack Truck full of dynamite, Shots From Deneb unleash an energy in every song that is genuine and pure, not a cookie-cutter production that simply follows in the tracks of metal greatness. At times sounding both old and new school, the band focuses on differentiating between guitar pitches and drumming speeds, creating an album that lands somewhere between Metallica and the Black Dahlia Murder. It's an interesting listen on many levels, and, with few flaws in their writing, a record that demands to be listened to over and over.
Starting off a little sluggish, the album soon finds footing on the third track, "Six Shots From Deneb," an airy, tough song that sees some of the album's best peddle effects and tempo shifts. Crushing bass picks up the back end and drives it home in moments that woul otherwise fall somewhat flat.
"War Never Changes," an Amon Amarth-esque shredder, is perhaps the most solid and well-composed track, highlighting every instrument at a given point and letting the band showcase their talents one at a time. The song also contains arguably the best vocals on the record, which sometime hit a little gravelly to the point of indecipherability.
A couple of longer tracks "To The Relic" and "...The Cargo Arrives" round out the effort, focusing heavily on chord play and string manipulation, much of which is rather bad ass. It is in these last songs that the band also brings out there their obvious affinity for desert rock, presenting repeated chord structures and fuzz so distorted it would blow the mind of any seasoned desert dweller.
A notable effort that missed our radar since its release in April, Shots From Deneb is easily one of the best sounding and musically intriguing bands that have found their way to us in 2013. Check it out for yourself and pray that more from the group heads our way soon.
~Joe

Shots From Deneb (name your price)