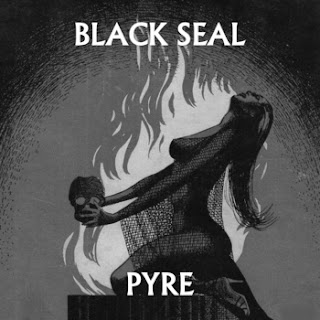 America's "Dirty South" has brought us Florida's Black seal this week, a psych rock/stoner trio blending a variety of sounds that winds up dark and groovy. Incorporating stylings from punk, early metal and good old-fashioned rock n' roll, Black Seal are more apt to let their creative arrangements handle the bulk of what is found on Pyre, which ultimately makes for a cohesive record chock full of riffs that seem to nod to a variety of musical generations.
Think of Black Seal as the type of band you put on when it's time to settle up to the bar, have a whiskey or three and then look for some trouble. The gritty and raw sounds of off-tuned guitar and humming bass setting the pace of your heartbeat and throbbing inside your head. A soundtrack asking for trouble and knowing full well it will be worth it in the end.
Boasting only five tracks, Pyre kicks off with a fuzzy array of slow sounds that soon erupt into an instrumental powerhouse channeling a strong blues/70's rock rhythm that perfectly sets up the rest of the record's slow-then-fast-then-really-fast-then-back-to-slow pace. Moving right into "The Inverted Cathedral," Black Seal awaken with macabre, hushed vocals that soon develop into biting verses with a real sense of toughness behind them. A mover and a shaker of a track, the song finishes strong and leads into perhaps the album's most unique track, "On This Day You Lose Faith," a song full of great chord play and speed changes that really highlight the band's affinity for classic punk. Singer Astaroth Crowley croons through the chorus, resetting the tempo to a near halt, which, in the end, makes the song all that much stronger and atmospheric. Rounding out the record with one more instrumental segue ("The Descent") and closing track "Conestoga Breaks Down," the band finishes strong. Sounding like a Led Zeppelin b-side on steroids, "Conestoga Breaks Down" possesses the album's cleanest and most range-showcasing vocals, varied drumming and mix of musical inspirations that the band has surely idolized growing up.
When it's all said and done, Pyre is a quick and interesting listen that any classic rock fan can relate to. It also possesses enough of an attitude to intrigue those who prefer the heavier side of music. A confident release, Pyre will certainly gain traction and begin popping up on a lot of radars. To help speed that process along, we at Ride With The Devil would like to offer you a free download of "Conestoga Breaks Down." Crank it up, folks!
~Joe

For Fans Of; Graveyard, Red Fang, OFF!, Big Business