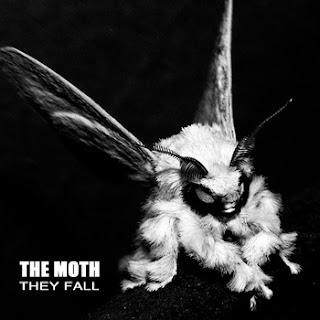 It should be understood by now that when German metal comes across my patch, it's probably going to get a thumbs up from yours truly. Even though I'm pre-disposed to these types of ass-kicking tunes, I must say that The Moth is another great example of what Germany is cranking out in their scene these days. A trio hailing from Hamburg and only playing together since late 2012, The Moth is a no bullshit, hard-rocking outfit that is raw and fierce. Settling for pure string and skins sounds, the band appears to have abandoned effects almost completely and crafted a debut full of crushing songs that is both a testament to smart song writing and skilled musicianship.
From the get go, The Moth impresses with blistering riffs, trippy solos and layered chords in "Won't Return," a track that also promptly displays the dichotomy of the male/female vocal exchange that becomes apparent and highlighted in every track. The transition from deep growls to harmonized croons are nothing necessarily new in metal, but is seldom pulled off so effectively. With neither vocal range hogging the spotlight, The Moth are able to keep the focus on their music, which, in all honesty, is so strong on its own that the band could survive as an instrumental act.
On the track "Open Forrest," the band dives into stoner rock territory, blasting forth with unrelenting chug-a-lug riffs and cymbal-riding drums. Definitely a standout track that could easily serve as a single for the group, "Open Forrest" sounds like an experiment that the band put together to get a feel for what would work best in their song-writing, but the ultimate result was a perfect blend of humming guitar and bass surrounded by smashing drums. Although the rest of the album hits like a ton of bricks, the song still remains my favorite and, I believe, best represents the band as a whole.
As They Fall rounds out on a lot of strong notes, the album still feels split, with the first half serving as a sort of "fast" side and the back half displaying a "slow" sound that leans toward the sludge-esque persona surrounding the band. With such a solid debut getting ready to drop on such a reputable German label (This Charming Man Records), The Moth is bound to explode globally and will (hopefully) find themselves thrashing across the world in 2014.
If you like what you hear from The Moth, They Fall can be purchased from the band's Bandcamp page (see link below), or, if you are a fan of sweet vinyl, can be pre-ordered on white vinyl here.
~Joe