Away With The Clouds... 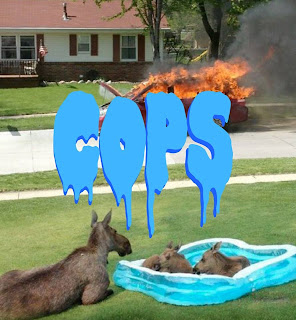 First impressions can be a bit of a bitch. When I'm faced with a cover depicting a burning mini van and a family of moose in a paddling pool, it's easy to just past judgement and think, "well, this is going to be mental." Where as, now having listened to it, what I should really have been thinking was, "this is going to be fucking mental"... Because it is. Like, inside the head of a psychopath kind of mental. Dark, dirty and incredibly goddamn eerie. Really, if I'd been played this with no backstory or prior warning my first thought would have been that Jay Randal (Agoraphobic Nosebleed) had suffered a stroke, found jesus, then been kicked into a studio with a shit load of meth. I'm completely at a loss as what to actually write about Cops if I'm entirely honest, other than its the brain child of Harry Cloud, who I honestly don't know too much about. I would however avoid introducing Harry to your sister/daughter, inviting him to family get togethers or putting him in charge or either small children or heavy machinery... If this is an insight into his psyche then I suspect he's possibly the kind of guy that would repeatedly punch your grandmother in the face then turn her limp lifeless body into some kind of life size marionette.
Bizarre isn't the word, all the right ingredients are there, just not necessarily in the right order, but for some bloody reason I can't stop listening to the damn thing. It's equal parts, hypnotic, noir, baffling and bat shit crazy. If you fancy having your subconscious systematically raped for several minutes give it a go. But I would suggest giving some of their prior releases a go first... Just to ease yourself in.