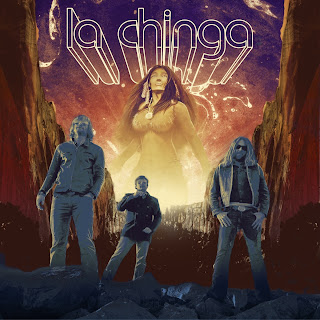 It's about time we received a bit of good ol' rock n roll, it feels like its been way way too long. Something that feels like its got it roots well and truly planted in the early 70's ya know? It's probably because I've been driving around in the sun all day listening to the likes of Grand Funk, West, Bruce and Laing, and Creedence Clearwater Revival. Still, luckily for me this is exactly what La Chinga are offering up, like a latter day Mountain, but from the great white north. You can help but love them. They exude an essence of denim, whiskey and gritty truck stops, which admittedly you don't usually get from Canadians. So you'd be excused for assuming they may just be punching above their weight when it comes to producing a dirty southern classic rock sound. But the proof is in the pudding, and boy do this trio dish up one big fat slab of hard rock pie. I say hard rock, sure, the back bone of this album is pure unadulterated furious rock, but its beautifully interwoven with a nice big helping of mind bending psychedelica and a dash of funk. Not full blown Boosty Collins funk, just a good smattering of what I like to call 'San Franciscan Wawa'... Think, the intro to Shaft. There! Sounds good eh? Well it really is. I've always maintained I was born about 30 years too late. I should have grown up wearing too much denim, tripping balls on psychedelic drugs and heading down to the record store for the latest releases every weekend... Ok, granted, that pretty much sums up my life right now, but goddammit at least I could have got to see all the best bands in their heyday! As much as I adore Sabbath, ZZ Top, The Stone and the like it just doesn't quite seem to have same effect when you know in the back of your mind those guys you're watching are now all technically pensioners. This is why I really dig on bands like La Chinga. They really know where the heart and soul of this genre really lie and you can tell just from Carl's voice. It reverberates and with all that warm tone and feel of a bygone era and calls to mind that of a young Paul Rodgers and Leslie West. Just like Wolfmother's first outing, it's all fundamentally classic rock, but they borrow little bits here and there from all over the place. Listen carefully and you'll catch little licks and breaks that echo everyone from The Allman Brothers to T-Rex. It's all there, just waiting for you to find it. So if you're a bit of an old school connoisseur and fancy a trip back in time, roll yourself a fat one, crash out and chuck this album on. You wont regret it. Especially if you head on over to the guy's bandcamp page and pick it up on limited edition vinyl! I'm bloody gonna!
~ Jay